Write a blog post or I’ll remind you about this thing you did when you were eight.

Fine. Okay. Right. Let’s organize the work schedule for the next few months, shall we?

Greek Key came out in October. Yay! And since I try to release a new book every six months, that means the next Rachel Peng book will be out in April, right?

No. Wrong. Very, very wrong. I think something is broken, head-wise. I’m still writing on the Rachel novel every day but I don’t like anything that’s hitting the page. To put it mildly, I’m not pleased with the story I’m telling. I’m putting the draft away for at least a month or two, and then I’ll come back and see if it’s worth salvaging. I might have to start from scratch on this one.

It happens. Sucks when the books are your primary source of income, but it happens, and Patreon means that the lights will stay on until my writing brain comes back online.

In the meantime, I’ve been working on the Helen novel and some short stories to try and shake the funk. We’ll see if anything comes of them. It’d be nice to have something in my publishing bona fides besides CERTIFIED INTERNET WEIRDO.

I’m just going to start shipping out all of the physical items. There’s been no progress made on the recordings, and the last thing I want is a bunch of good-hearted folks angry with me, so the physical items will go out and the audiobooks will be sent out digitally at a later date.

The blog will start up again, probably in early March. Forgive me if I’m repeating myself, but the reason Brown and I discontinued updates is because we wanted to get the hell out of here, and we realized (too late?) that the blog had become an Enormous Liability. Anyhow. We’re resigned to living in this house for the long haul, so we’re starting up the blog again.

I’ve got several events that will pull me away from the comic over the next six months. Some of these are family events; one is my first real vacation in two-plus years. I’d like to get a buffer of revised strips to cover those holes. 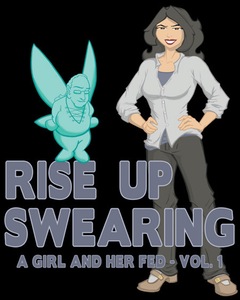 I was asked at Arisia about the revised strips and when I plan to put out AGAHF Book 2. Yeah, about that… Book 1 hasn’t sold well. Has barely sold at all, really. I had approximately 300 preorders and immediate purchases when it came out in 2012, and have sold about 200 copies since then.

500 copies in three-plus years isn’t great. It’s very much less-than-great. Downright lousy, one might say! I’d like to do the entire comic in collected book form, all nice and matching on my bookshelf, but the market isn’t there.

What I am going to do instead is to get the A Girl and Her Fed tumblr going. I’ll be updating this five days a week. Tuesday, Wednesday, and Friday will have revised strips with “creator’s commentary” or whatever the cool artists call it. Monday and Thursday will show the regular comics on the current update schedule. I’m hoping that this will bring in new readers, and will bump the Patreon up to where I can afford to do revised strips again. This will begin on a Monday: not yet sure which Monday, but I’ll announce it a couple of weeks in advance.

One – 1 – person participated in the latest free book giveaway. I blame myself for not promoting it at all.

A freelance editor who writes novels, comics, and repairs a disaster of a house in her spare time: www.kbspangler.com View more posts

3 thoughts on “Never-Ending List of Things to Do, Feb ’16 Edition”