Thanks to all who participated in GIMME BOOK! 2014. Hopefully this is the start of a fun annual tradition. Here are the winners:

I got a lot of pictures of Post-It notes on tables and hanging from bookshelves. There were also a few that jumped out at me, but had to be disqualified. For example, I liked this one in terms of its artistic merits–the blank book with a GIMME BOOK! plea is especially meta–but it was didn’t win because there is just too much that was right about it as a photographic composition. Definitely not boring enough.

Second prize is by J.B. This entry is yet another sittin’-onna-kitchen-table piece, but there’s something almost nihilistic about it. It’s like staring into the void, but the void wants you to file your 401K…

The first prize winner is Donovan C., who took a screenshot of my sample post and sent it in. Donovan, you are one gloriously boring dude.

You guys do enjoy yourselves some cute/weird. I got a lot of talking animals.

And wall hangings of talking animals.

Second prize goes to David R., who sent in a picture of himself, with a mustache added in post. 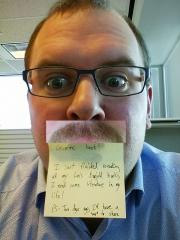 This wins not just because of the Movember ‘stache, but because this is highest resolution I could pull from his image. As best as I can tell, the text reads: “Gimme book! I just finished re-reading all my Luis Bojod bats, I end some thunder in my life. PS – Two days ago, I’d have a hmo to shave”. Congratulations, David! I love Lois Bojod bats and shaving HMOs, too.

There was one hand-drawn image submitted. I’ll be honest: this would have won for weirdest if David F., the cartoonist, hadn’t designated it for the FUNNIEST category. 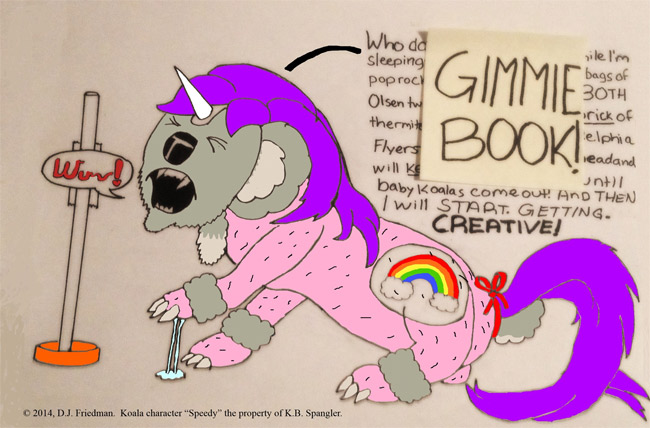 But don’t feel too bad for David F., who still took first prize for weirdest.

I think it’s a seascape? I dunno. It’s got some kind of orange filter and a law theme floating in mid-air over a rug that has never tied any room together, ever, unless maybe there was a dentist’s waiting room in the original TRON. I have no idea what’s going on here. Well done, indeed.

If I’m being honest, the only photo that made me laugh out loud was Donovan’s. (I have independent confirmation on this: I showed it to Brown, who also laughed. We both appreciate Grade-A Lazy.) But two stories came in that made their pictures quite funny.

Second prize goes to Erin O., who sent in this picture: 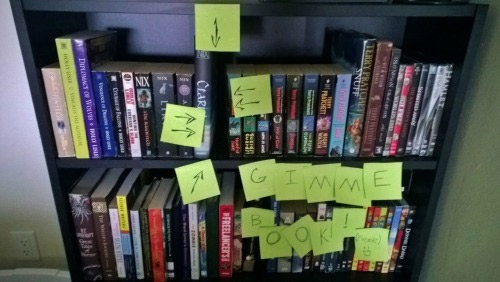 I put up all the sticky notes, wandered into the other room to post the picture, and then promptly forgot about them until my roommate got home and started going “Book? What book? Am I supposed to be buying you a book? Why are you telling me via sticky note??”

The first prize winner is Amanda J., who decided to recreate the scene of nekked Mare hanging from the ceiling fan using a Rapunzel doll. Except she couldn’t find the Rapunzel doll, or get her hands on anything resembling a doll-doll. She resorted to using what I think is a featureless beige sock monkey?

So! Thanks to everybody who participated. Winners, please email me your contact information, and I’ll have your books out when my restock of MAKER SPACE arrives next week.

A freelance editor who writes novels, comics, and repairs a disaster of a house in her spare time: www.kbspangler.com View more posts